The NSW coast has been battered by heavy storms this month. Aside from large scale flooding, fallen trees and some nasty accidents, the 40,000 ton coal freighter “Pasha Bulker” ran aground off the coast of Newcastle… actually it was more like it ran aground in Newcastle as Nobby’s beach, Pasha Bulker’s pseudo-wharf is a mere 15 minutes walk from the middle of Newcastle city.

So, armed with the 5mp camera on my new Nokia N95 and with some excellent company, the trip was made to Nobby’s beach to see just how big the ship was and how incredibly close to the shore it was (the answer was “very close”. I’m sure you could wade out to if it wasn’t all fenced off!).

I present the Pasha Bulker . (In the same vein, you might also enjoy the shots of the beached Guadalupe that I took in Mauritania in 2005) 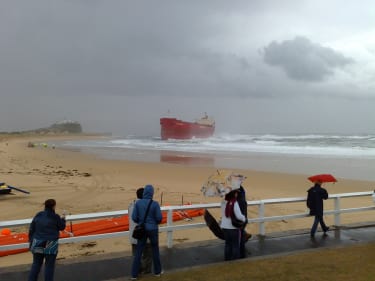