So my year in cities, 2006 wasn’t quite as exotic as 2005 and it’s never going to get easier to justify going back a whole year so I figured I’d do it now and cut my losses!

The rules state: one or more nights spent in each place. Those cities marked with an * were visited multiple times on non-consecutive days.

I saw Kottke’s year in cities 2006 and figured it’d be fun to do mine too:

The rules state: one or more nights spent in each place. Those cities marked with an * were visited multiple times on non-consecutive days.

A few days ago someone broke into my car and pinched a bag with a bunch of my stuff in it (wallet, phone, iPod, books, journal, clothes etc). Bah. It’s a right pain, yet as I’m getting my affairs back in order I find a pleasant, technical distraction in seeing contrasting approaches to information security and prevention of identity theft and loss.

Having cancelled my stolen cards, I dig out my spare credit card and go to get out some money for the next few days. I keep a spare credit card tucked safely away for occasions such as this but sure enough I can’t remember the PIN so I go into the nearest branch…

Outcome: I’m affirmed that the CBA care about their internal security as well as my account security. CBA rises in my eyes.

I use my phone lots and while it’s nice not to be able to receive work calls, there’s a weekend coming up with things to organise :-) I’ve borrowed a mobile handset while I decide what handset I’ll buy so all I need to do now is get a replacement SIM card from the Optus branch.

No complement for Optus - There was no ID check that I was the account owner. Zero. Zip. Nada.

Phone theft - double for nothing

If you don’t think such ID checks are necessary, take this situation:

I’ve written this scenario to show how easy it is to take advantage of lax security. I’m sure thieves are smart and creative so I really doubt this is anything new. In the meantime, I’m going to call Optus and CBA to tell them how important account security is and how this experience has affected their image in my eyes. Once they know that customers take real account security seriously (and not just marketing speak about security) perhaps they’ll take it seriously too.

I sure hope companies take my account security seriously… especially Optus -they have a bit of work to undo!

What better way to spend a public holiday than out in the country? Breathe in the crisp morning air, drive through quiet winding roads, see and hear actual wildlife and stuff yourself with good food while hanging out with friends. Bring it on.

Jenolan Caves is a collection of limestone caves about 2.5 hours west of Sydney. There are about 12 “show caves” and the guided tours take between 1 and 2 hours. You’ll stay clean, see fantastic limestone formations, probably learn some basic geology and have a brilliant, relaxing day away from the city. I’ve been back several times, you’ll probably do the same.

Here are a few recommendations if you’re planning a trip:

And here’s a taste from the “Temple of Baal” cave: 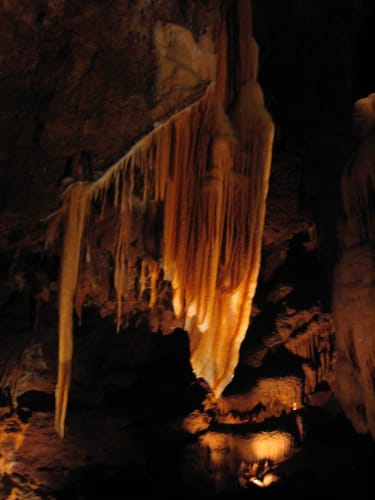 The Australian Government recently delivered the budget for the 2006/07 financial year. It caused a bit of a ruckus because the tax cuts were aimed primarily at high-income earners. This week I received an email defending those tax cuts. It surprised me. I wasn’t surprised that people are greedy but I was surprised at the lengths they will go to in order to justify it. People are going to see this email so you might as well see it here with some perspective. Honestly, it’s a well written story but it’s just not as simple as the email makes out:

At last, a proper explanation for the whingers that believe the wealthier are ‘given’ too much… Here is the REAL story to lighten the Budget discussion! You’ve heard the cry from across Australian the last couple of weeks: “It’s just a tax cut for the rich!” - and then it’s accepted as fact. But what does that statement really mean? The following explanation may help.

Attributed to Prof. David R. Kamerschen, Professor of Economics at the University of NSW.

Suppose that every night, ten men go out for dinner at La Porchetta’s. The bill for all ten comes to \$100. They decide to pay their bill the way we pay our taxes, and it goes like this:

All 10 are quite happy with the arrangement, until one day, the owner says:

“Since you are all such good customers, I’m going to reduce the cost of your daily meal by $20.”

So now their dinner for ten only costs $80.

The group still decides to pay their bill the way we pay our taxes.

The first four men are unaffected. They will still eat for free.

But how should the other six, the paying customers, divvy up the $20 windfall so that everyone would get his “fair share”?

They realise that $20 divided by six is $3.33. But if they subtract that from everybody’s share, then the fifth and sixth men would each end up being paid to eat. The restaurateur suggests reducing each man’s bill by roughly the same percentage, thus:

Each of the six are better off, and the first four continue to eat for free, as now does the fifth - but outside the restaurant, the men began to compare their savings.

“That’s right,” exclaimed the fifth man. “I only saved a dollar too. It’s unfair that he got ten times more than me!”

“That’s true!” shouted the seventh man. “Why should he get $10 back when I got only $2? The wealthy get all the breaks!”

“Wait a minute,” yelled the first four men in unison. “We didn’t get anything at all. The system exploits the poor!”

The nine men then surrounded the tenth and beat him up.

The next night the tenth man didn’t show up for dinner. The nine sat down and ate without him, but when they came to pay the bill, they discovered that they didn’t have enough money between all of them to meet even half of the bill!

That, boys and girls, journalists and college professors, is how our tax system works. The people who pay the highest taxes get the most benefit from a tax reduction. Tax them too much, attack them for being wealthy, and they just may not show up at the table anymore.

There are lots of good restaurants in Monaco and the Caribbean

While it’s a cute story, the problem is that I can’t remember the last time I saw 4 low-income earners regularly eating out at a restaurant. Most of them have their hands full just coping with rent, basic food and childcare. Forcing a high-income earner into a “tight-spot” where they can only upgrade their late model car every 2.1 years instead of every 2 years just doesn’t weigh heavily on my social conscience.

I’ve been at both ends of the tax spectrum. This “whinger” still reckons reducing the rate for the top 2 tax brackets doesn’t help those who really need it most… target the bottom brackets and then some low-income earners might make it to La Porchetta’s once a year for a treat… perhaps.

I hope you’ll remember the other perspective the next time there’s mention of tax cuts for high-income earners.